Covering the Arts at WSHU 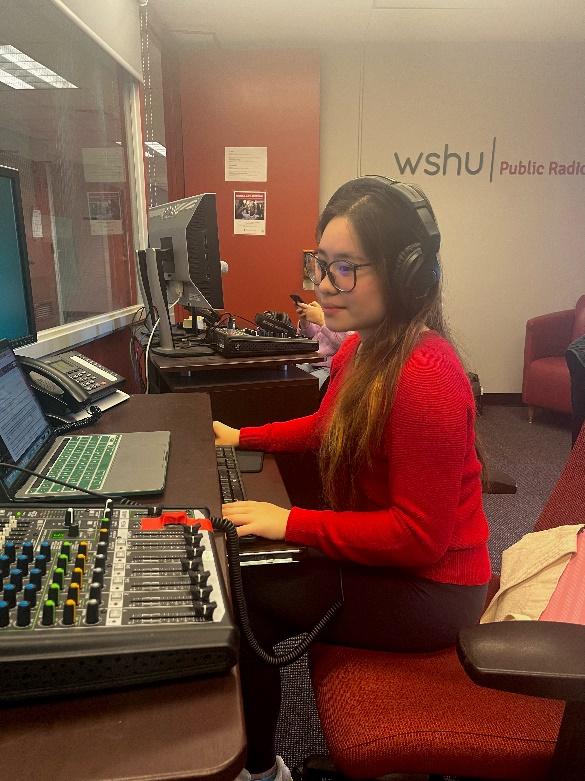 During my Fall 2022 Internship, I worked as an WSHU News Intern, covering arts, music, and entertainment news. I conducted interviews with organizations around Long Island and Connecticut. I wrote web copies and “cut and copies,” so the piece could be heard on the radio for their segment called “All Things Considered,” which was heard on the radio at 4 p.m. By the end of the internship, I have written 13 pieces for WSHU about the art and music culture happening around their communities.

The first piece that I wrote for WSHU was for a story at Staller Center for the Arts. I covered their art exhibit, Connecting the Drops: the Power of Water which wanted to share awareness of climate change and the environment. I interviewed Georgia Lamair, the gallery’s public programs manager. This was the only interview I did in person because all the interviewees couldn’t come to Stony Brook University but this experience was great. Georgia and I were both nervous because it was my first interview in person this semester and for her, she didn’t want to screw up the audio. During this interview, I felt the nervousness go away and I felt prepared to go in. I had wished I had known that the commentary that I needed in my own radio show at WUSB was not what was needed in the interviews here. When J.D Allen, my supervisor, reflected on the interview, he mentioned that I kept wanting to add in my reactions which are normal but aren’t preferred in radio. Nonetheless, the web copy and cut and copy turned out great. It had great photos and quotes that I was able to use.

Another story that I enjoyed writing about was UConn’s upcoming season for the arts. I interviewed Rodney Rock, who was incredibly excited to talk to me and to talk about his experience creating this season. The interview was held on zoom, but all the emotions of excitement were there. The Emerson String Quartet was the main highlight of the conversation because they were announcing their retirement from performing. The format of the web copy was two-way which was new for me. I got to write it in the form of an interview which was good to see. Rodney Rock introduced me to many artists but the one that I was most interested in was Rhiannon Giddens. Giddens is a Grammy and MacArthur award winner, and it was great to learn more about her work and what she hoped to perform at UCONN.

Another story that I enjoyed writing about was the Waterbury Symphony Orchestra. I was classically trained in my education during my high school years at Fiorello H. LaGuardia High School and I saw it come to light when Leif Bjaland, the music director and conductor of the symphony orchestra mentioned the works that they performed. He said how classical music was made for everyone. Bjaland called classical music a conversation between the performers and the audience because they encapsulate how majestic it is and the works offer an experience like no other. I was glad to hear that they wanted to keep and preserve classical music because it is like a lost art now.

This internship has been a great experience and an amazing opportunity for me to hone my interviewing skills and writing skills. It has allowed me to become better at time management as well. Along with this internship, I took 6 classes and it was manageable but there were times when I felt anxious that I wouldn’t make a deadline but I practiced writing my top priorities to make sure everything was done in a timely manner. J.D.’s feedback throughout the semester has been so incredible and has allowed me to grow into a better communicator and reporter. He gave valuable insight which I always appreciate. WSHU has given me many connections which is what I am truly grateful for. Along with working with J.D. Allen and Terry Sheridan, who are amazing and influential mentors, I was able to meet with Rima Dael, who’s the general manager of WSHU Public Radio. Meeting with Rima allowed me to introduce myself as someone who’s passionate in the radio industry. I will take all the skills that I have learned from WSHU to bring it back to my position as a radio host and music director and WUSB. For any SOJ students that consider taking this internship, it has helped tremendously with reporting and communication skills which are needed in the newsroom and I hope that it will help them too!